This area is among the most culturally-rich parts of southern France. There are the stunning medieval cities of Cahors, Figeac, Albi. Cordes-sur-Ciel. The villages of Belcastel, Sauveterre-de-Rouergue and Saint-Antonin-du-Noble Val. The cave paintings in Pech Merle, which are among the very oldest works of art in the world. The magnificent shrine of the Black Virgin in Rocamadour. And one of the very best ways to see some of these sites is by train from the local station in Najac.

Najac station is a complete delight – small, set on the banks of the Averyon river, underneath the medieval chateau, and the trains travel along the beautiful scenic route between Toulouse and Figeac. At Figeac, you can change trains for the line to Rocamadour/Padirac.

From Rocamadour/Padirac station there is a footpath across the limestone « causse » between stone walls and sturdy oak trees. This is the original pilgrim route, taken by the thousands of people who walked the « camino » to Compostella and visited the shrine of the Black Virgin in Rocamadour.

After 40 minutes the medieval city appears in the distance, rising from the gorge of the sunken Alzou river, a tributary of the Dordogne. 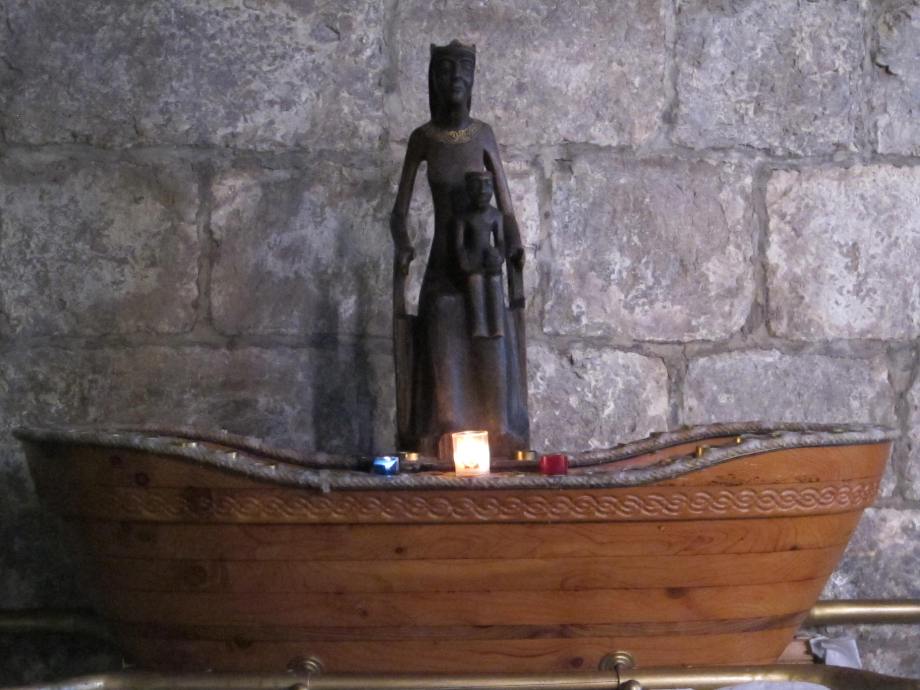 The Black Virgin – an ancient image of the godess which predates Christianity – holding the Divine Child and standing on a boat, which represents the soul.

The original Black Virgin statue above the altar, with a ship model suspended from the ceiling. A ship was a traditional offering made to the Virgin at the shrine.